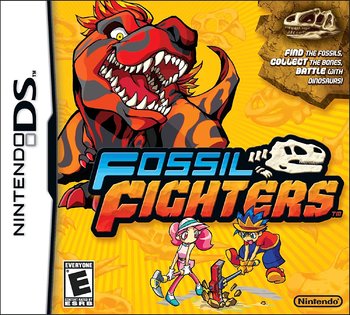 Can you dig it?
"Awaken an era."
Advertisement:

Fossil Fighters (Kaseki Horider, or "Fossil Hunters", in Japan) is a Mons collection RPG/paleontology sim series for the DS and 3DS.

The first game is set on the tropical Vivosaur island, where the Richmond archaeological foundation has built a fantastic resort. Using the brilliance of Dr. Diggins, they have developed a process to revive dead animals from fossil fragments (Sound familiar?). As a side-effect of this process, the animals are not complete copies of the creatures they originally were in life—they gain unusual appearances and best of all, superpowers. Vivosaur Island has become a playground for the rich where wealthy young dinosaur fanatics can revive extinct animals in the form of superpowered monsters and fight them against each other for glory and fame.

Like most games, this one stars a young boy (or girl, starting with the second game) who aspires To Be a Master. You hunt fossils, battle other fans, and raise in the ranks, with the help of his friends. The island is lousy with groups of fossil thieves and general schemers who want to Take Over the World, but there are plots stretching far beyond that...