Video Game / Robot Dinosaurs That Shoot Beams When They Roar 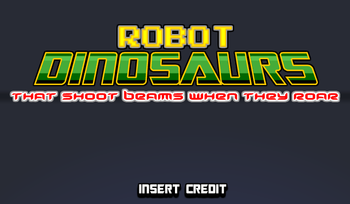 "Yo dawgs. I just finished a new one, and it's an introspective take on a personal life experience I once had that I think leaves me emotionally vulnerable, while encouraging the player to think about their own feelings and how they're percieved by the people around them. It's called Robot Dinosaurs That Shoot Beams When They Roar."
— Author's dino-description on Kongregate
Advertisement:

Need to recapture the feeling of being a kid pretending you're in a Saturday Morning Cartoon for a few minutes? Tired of games with ambiguous titles? Just played Today I Die and need to restore your emotional equilibrium?

Robot Dinosaurs That Shoot Beams When They Roar is an Adobe Flash game about cybernetic prehistoric reptiles which fire lasers whenever they growl. A scrolling shooter with a hilariously ridiculous premise, it was originally released in 2009 on Kongregate.