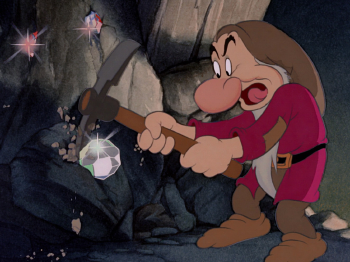 Look at that! An entire cave full of wedding rings!
"In a mine, where a million diamonds shine!"
— Snow White and the Seven Dwarfs
Advertisement:

In real life, gem appraising, cutting, polishing, faceting, etc. is a multibillion dollar industry. Not so in fiction. Not only are they much bigger, they're just naturally flawlessly cut and perfectly shiny, even while they're still in the ground, or where there's no logical way they could have been cut. Characters will find these gems studding the walls of a mine, lying close to the surface, or lying casually in open fields. Bonus points if there's also clumps of different types of gem. Any place where they're abundant is usually a City of Gold.

While tumbled pebble gems may look "polished," and really good mineral samples can have well-formed crystals, most of the ones commonly considered very valuable (diamonds, emeralds, sapphires and rubies) do require quite a bit of work to be presentable. In the rough, they look like all other dirty, randomly shaped rocks, so much as to be passed over as such by the untrained eye. The common gem shapes seen in jewelry stores aren't naturally present in any gem. The circular diamond with a pointed bottom, rectangular emerald, and perfectly rounded opal were designed that way to best showcase the gem (for instance, the "brilliant" cut for diamonds maximizes their sparkle by angling reflected light back through the top of the stone).

This is probably an Omnipresent Trope. Sub-Trope to Artistic License – Geology. Related to the Rule of Perception (as many viewers would be unable to identify uncut gems as such without being explicitly told what they are) and Color-Coded Stones (when stones are only distinguishable from each other by explicit colors) and could lead to Reality Is Unrealistic. Compare with Gold Is Yellow, when golden objects are colored unusually bright yellow, and Ice Crystals, when ice is represented with similar crystal shapes, naturally-ocurring or otherwise. Not related to All-Natural Snake Oil. See also All That Glitters.