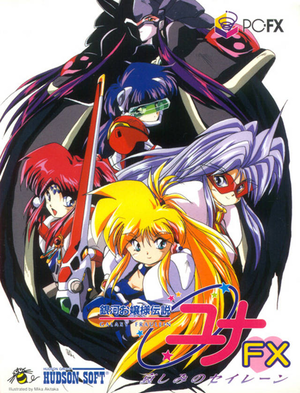 Better known in North America for the anime than the games which started the franchise, Galaxy Fraulein Yuna is one example of what happens when you set a magical-girl story three centuries into the future. It was created by Mika Akitaka and developed by Hudson Soft and Red Entertainment.

The main character, Yuna Kagurazaka, is a bit better off than Usagi "Sailor Moon" Tsukino as far as brains and coordination go, and has the good fortune to be winner of an interstellar beauty contest, a teen celebrity, and an Idol Singer even before she gets called to become the Savior of Light, a Magical Girl tasked with saving the entire universe from the forces of Darkness.

As of 2021, the franchise consists of four games (not counting remakes) and two sets of OAVs, a two-episode arc and a three-episode arc, both set before the third game.