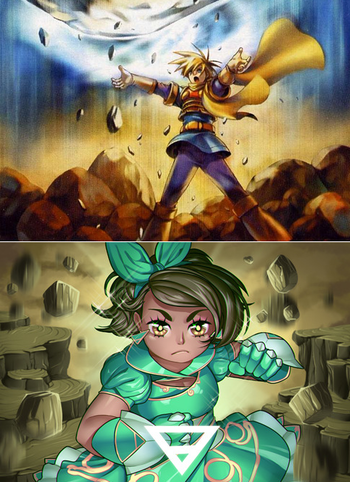 Boys rock, girls rock.
Top: Isaac. Bottom: Gwen Morita.
In real life, earth (referring to soil) consists of various shades of brown, and can also be red, yellow, green, black, or gray depending on the composition. Earth (the planet) is blue due to the high percentage of water, and the air molecules bouncing off blue light.
Advertisement:

However, in certain works, colors like yellow or green are used to display earth-related powers. How earth is portrayed as yellow or green can depend on the region the work is from.

Yellow earth is commonly seen in Eastern works because the color is considered culturally significant. China sees yellow as a very important color; it has historically been worn only by emperors and Buddhist monks, it represents earth in their element system, and it's the color of the soil deposits that come from the Yellow River, which is the cradle of Chinese civilization. In real life, sand in deserts and some beaches is a light tint of yellow, and soil can be a golden yellow if iron oxide is present. Yellow ochre, which contains iron oxide, is extracted from that soil for pigment — it's the earliest example known to be used by mankind.

Alternately, green is used as a color for earth because of its association with nature and environmentalism; using green can overlap with Green Thumb and Emerald Power. In Western works, earth is usually portrayed in green, while air is portrayed in yellow or white.

If yellow and green are taken, brown is optimally used, yet will emit either a yellow or orange aura because it's impossible to make brown light, and "brown" light is essentially orange.

Note: Kindly provide a detailed context on how earth is colored with yellow, green, or any other color, lest it is merely labeled under Color-Coded Elements.

Yellow Earth (can include ochre and golden brown)

Green Earth (can include yellow accents)

Brown/Orange Earth and Other