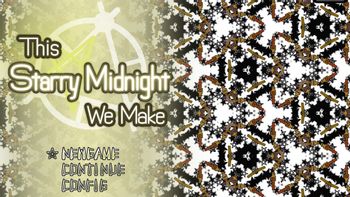 This Starry Midnight We Make is a puzzle game by Cavyhouse and later localized by Carpe Fulgur. It is a game about making stars.

Hamomoru Tachibana is attending a festival when a wandering train of thought leads her to check out a local shrine. There, she encounters a university student named Chuunyu Shingoh, who is researching the Star Basin at that shrine, curious as to whether the mystical powers it supposedly has are real, or if it's just superstition. Hamomoru assists him by placing stones in the basin and seeing them evolve and shine like stars, but then learns that her ticket home is missing, and gets roped into helping Shingoh further his research until she can leave.