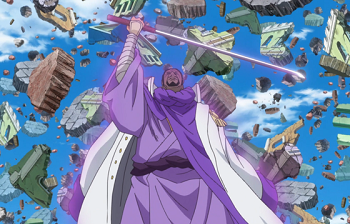 Gravity, when depicted as an element, tends to be quite tough to visually represent in media, what with it being an invisible force and all. Well, wind has a similar problem with being colorless, but people from Asia decided to just depict it as green at some point. Maybe they also came with a solution for this? What kind of color would they use to represent gravity?

The answer appears to be purple most of the time. This color does appear to be very popular to associate gravity with in East Asian media. Now, the logic for this one doesn't appear to be very obvious at first. Is it because gravity is powerful? Or maybe otherworldy? After all, purple is viewed as a space-ish color, despite outer space being mostly black (but then again, Purple Is the New Black). In Western media, gravity tends to have more diverse coloring (assuming it even has color in the first place), with purple occasionally showing up as well.

Like gravity, darkness also tends to be associated with purple color schemes, and is not uncommon for both elements to overlap with each other. In this case, some black or dark blue may be mixed with the purple. Black Holes are a popular result of this elemental blending, and they're also often depicted with purplish tints despite their name (again, because Purple Is the New Black). Expect Gravity Masters to have purplish motifs too.

A Sub-Trope of Color-Coded Elements.