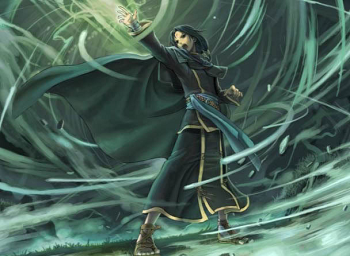 When Elemental Powers are color-coded (for your convenience), air and wind, being invisible and colorless, present a conundrum. Blue, yellow, and red are taken by water, lightning (or earth), and fire. But in occult western symbolism wind is supposed to be Yellow, and generally white, the next most likely color, may be taken by some form of White Magic, be it holy, light and/or healing spells.

So in many settings, since it's the only one missing from Chromatic Arrangement, wind gets associated with green, either in the color coding system, in the motifs of the characters using it, by making the actual spell effects green, or any combination of those.

The reason isn't obvious unless you poke through East Asian philosophy and symbolism. In Hinduism, green is the color of the heart chakra, which is also associated with air. The association bleeds over into Buddhism somewhat, though not consistently. Additionally, Taoist philosophy believed that wind was a product of the element wood; if you think about it, the most obvious sign of wind is when it blows through grass and trees.* So wind really is made by trees sneezing, apparently. Therefore, you'll see this trope mostly in East Asian works, particularly Japanese Video Games, even though yellow and white are also cited as being associated with air by Chinese and Japanese symbolism. Could also be Truth in Television, as green skies will sometimes precede heavy storms (see the Real Life section).

Today, this trope is often propagated by the association of wind with earth-friendly, "green" wind-generated power.

Compare Water Is Blue, Fire Is Red, and Gold Is Yellow. Also compare Yellow Lightning, Blue Lightning and Yellow Earth, Green Earth. Also see Gravity Is Purple, for another colorless "element" which is often associated with a specific color.

(And no, this has nothing to do with that kind of wind. Grow up.)