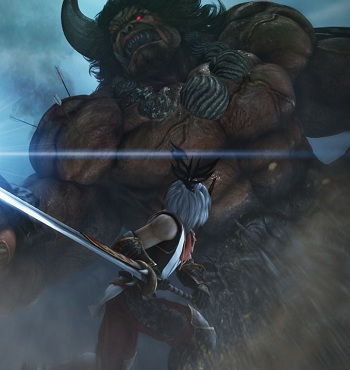 Just another day in Utakata.
Advertisement:

Toukiden is an Action-RPG "hunting" game for Playstation Vita and Playstation Portable (PSP version released in Japan only) set in a fantasy world with medieval Japanese themes.

Throughout history, warriors known as mononofu, or "Slayers", have been protecting Nakatsu Kuni from malevolent beings from the Underworld known as Oni in secret. Eight years prior to the commencement of the story, a calamity known as the Awakening opened a massive gateway to the Underworld and brought an era of destruction as the Oni hordes ravaged the land and its people, forcing the mononofu to step out of the shadows and take charge of the fragmented remains of society. The story takes place in Utakata Village, one of the final lines of defense against the demons.

The game was published on June 2013 in Japan by Koei Tecmo, to great success. This was one of the few games that helped the sales of PS Vita: the weekly amount of PSV sold quadrupled during the week this game was released. An Updated Re-release titled Toukiden Kiwami was released for Vita and PSP in Japan in August 2014 (The Playstation 4 version was released in April 2015), with a March 2015 release on Vita and PS4 for the US and Europe, and a June 2015 release on Steam.

A sequel, Toukiden 2, was released on July 28 2016 for Japan, with Western releases scheduled for late March 2017.