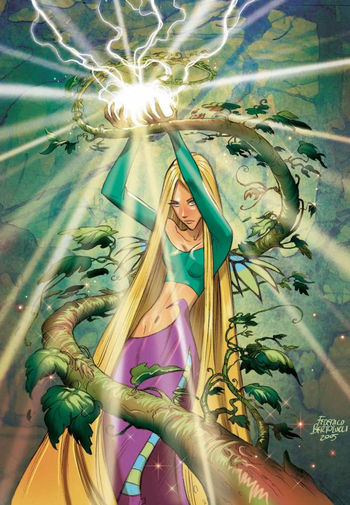 A real kick-grass power.
Ysengrin: You should admire this body Lord Coyote has gifted me with, Renard. Now the very trees of Gillitie are under my command!
Reynardine: I tremble in the presence of your terrifying skills of gardening, Ysengrin.
— Gunnerkrigg Court, "The Fangs of Summertime"
Advertisement:

The power of supernatural control of plants (and usually fungi, too) via Super Powers, Applied Phlebotinum or magic. People with this can essentially make plants grow, make them move around like animals, create vines from the earth, summon poison ivy, sic trees on you, and so on.

Sometimes mocked as What Kind of Lame Power Is Heart, Anyway?; even if the character is very powerful, expect wisecracks about their superpower being "gardening". Writers often go out of their way to disprove these assumptions through displays of great power from plant-based characters. Hit the Berserk Button of someone with a Green Thumb and you can find yourself in a full-blown Garden of Evil surrounded by Plant Mooks.

May be paired with Petal Power and Fertile Feet. Their ability may extend to manipulating Fantastic Flora, if the setting has any. May involve Talking to Plants. Often overlaps with Reed Richards Is Useless, since it seldom occurs to them to grow fruits, vegetables, or grains for the hungry or reverse the effects of deforestation. Though sometimes it's given an explantation that it's not practical to do so for reasons such as the character can't grow plants over a wide area, it risks exhausting the soil, or it's Cast from Hit Points or Cast from Lifespan. Symbol Motif Clothing can be involved if the wearer has several plant shapes on his/her clothing or, heck, if they're wearing plants in the form of a Garden Garment. Their blood is likely to be Fertile Blood.

The Plant Person and Nature Spirit are especially fond of this trope. An especially powerful Green Thumb allows a character to create a World-Healing Wave. Sometimes classified as one of the Elemental Powers, often as a subset of the "Earth" element in western works, or go standalone or with "Wind" element in eastern works. If called "Nature", then Nature Equals Plants is in play.

Not to be confused with Caring Gardener, though can easily go hand-in-hand. Compare Friend to All Living Things. Compare Biomanipulation, the power to control and manipulate flesh, and The Beastmaster and Fluffy Tamer, abilities to control animals/beasts.

Isabela's gift is the power to spontaneously create plants. For most of her life she only makes flowers, but she starts expanding when she becomes honest with herself.

Isabela's gift is the power to spontaneously create plants. For most of her life she only makes flowers, but she starts expanding when she becomes honest with herself.