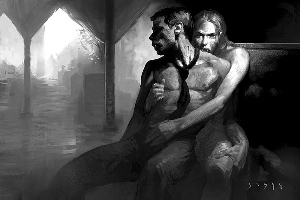 Blood, sex and violence. Is there a difference?
Advertisement:

A tabletop roleplaying game in the Chronicles of Darkness line and Spiritual Successor of Vampire: The Masquerade. Players take the roles of vampires, people Cursed with eternal (un)life, supernatural power, and — oh, yeah — bloodlust and a fatal sunlight allergy.

In Requiem nobody knows exactly how the vampirism curse started. Some believe that they were cursed by The Powers That Be for a specific purpose, others believe that vampires are a concealed part of the natural world and there are those who think it's not important at all. But one thing is for sure, vampires have stalked and preyed on humanity for a very long time.

The mortals killed and brought back as vampires are in for a tough existence. The first thing to be noticed is the ever-present Beast, the name given to the urges that drive vampires away from their Humanity (one of them being an endless thirst for the blood of the living). Then there is the fact that fire and sunlight are the bane of their existance. They also have to socialize with other bloodsuckers that compose vampire society, which can be roughly described as vicious, and most likely deal with hunters and/or other nasty creatures that go bump in the night. Every night since the first is a battle for survival (metaphorical, or not). In addition (maybe as a compensation) they get powers like immortality, super strength and supernatural charm, just to name a few, aside from the possibility that one night they may become the almighty overlords of the afterdark.

The various Splats of Vampire are as follows:

The Clans: A Clan is basically a blood family which is determined by the Sire. Instead of the previous game's thirteen (and then some) clans, clans being the most distinctive (and easily litigated) feature of White Wolf's system, it was whittled down to five "archetype" Clans, but each one of them has tons of Bloodlines that adds a few more variations.

The Covenants: The political parties and/or religions of the Kindred.

For more details on Clans, Covenants and other creatures that composes the Requiem line go to Character Sheet