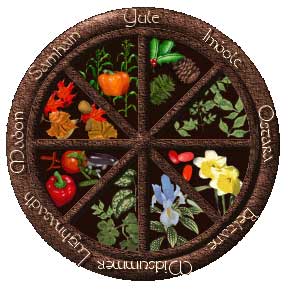 The Wheel of the Year, depicting the Sabbats.
"If you leave the Bible out in the wind and rain eventually all of its teachings and lessons wash away. Our Bible IS the wind and rain."
— A version of the famous quote told to an author by an unknown Native American woman.
Advertisement:

With increased tolerance of other faiths in the West, several movements have appeared to restore the long-dead polytheistic faiths that had been banned (or faded) since late antiquity. Of course, reconstructing these religions accurately is next to impossible because there are very few non-biased historical accounts of them and practically no first-hand written descriptions of the religions by its worshipers (mostly because these religions mostly existed in oral traditions—the Jewish idea of writing down the words of God—and then the oral tradition around the words of God—was very innovative for its time) although archaeological records have provided some clues. As a result, Neo-Pagan movements tend to be vague and non-dogmatic versions of the original belief systems. There's debate (particularly with Christianity, Judaism, etc.) whether these could be considered "true" faiths (such as regarding their origins), but that's another story.

To most people in North America, Neo-Pagans are Acceptable Targets because of their allegiance to long-abandoned beliefs. At best, they are seen as harmless Cloudcuckoolanders and at worst, they are associated with evil cults and neo-Nazi/white nationalist groups (possibly thanks to Varg Vikernes). Usually, they are lumped together with New Agers. However, active discrimination has decreased in recent years.

Currently, the number of Neo-Pagans (collectively) is around 3,000,000 and is still growing. Many prefer to be simply called "Pagans," even though the term is considered to be ambiguous by religious scholars. Today, there are many Neo-Pagan movements through the Western world. Their most common elements are respect for nature and opposition to religious dogmatism.