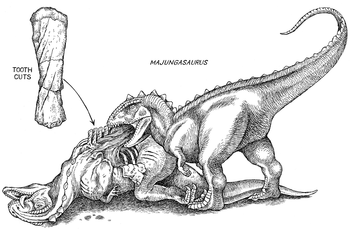 "Looks like meat's back on our menu, boys!"
— Uglúk (after cutting off the head of another orc), The Lord of the Rings: The Two Towers
Advertisement:

To display how vicious, ravenous, or just plain evil a predatory species is, writers often have the strong among them literally prey upon the weak. While cannibalizing outsiders or eating sapient creatures is nasty enough, doing so to members of one's own social group is indicative of betrayal as well as cruelty, suggesting an evil or Horror Hunger so indiscriminate that no-one is exempt.

With non-sapient creatures, Monstrous Cannibalism conveys how voraciously hungry the predators are and may indicate that their species as a whole is starving and desperate. For sapients, it demonstrates a ruthlessness that bodes ill for any other species they interact with: if their instincts or culture make eating their weaker fellows a standard practice, what hope might a stranger have of being spared? In either case, seeing them turn upon their own for food is often what pushes a species over the Moral Event Horizon into being monsters in the eyes of the audience, not just beasts or antagonists.

Subtrope of I'm a Humanitarian; often a supertrope to Cannibal Tribe, if the tribe eats its own as well as enemies/strangers. Compare To Serve Man, in which victims from outside one's social group are preyed upon, and No Party Like a Donner Party, in which cannibalism is an abhorrent last resort. Contrast No Zombie Cannibals and Ape Shall Never Kill Ape.

May result in a Food Chain of Evil within the group. A common way for the Monster Lord to establish its dominance over its underlings. Sometimes overlapped with Always a Bigger Fish.