Western Animation / The Flight of Dragons 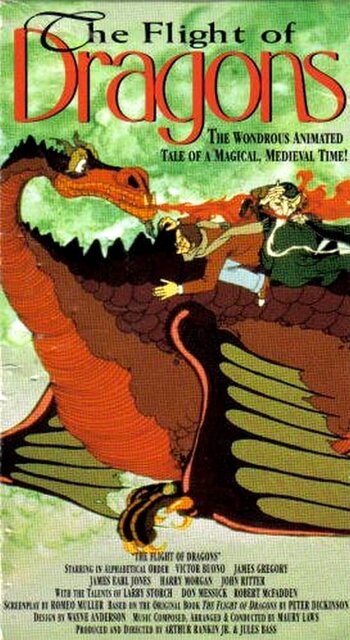 The Flight of Dragons is a Rankin/Bass Productions animated film, produced in 1982, but not aired until 1986. It is loosely adapted from Gordon R. Dickson's fantasy novel The Dragon and the George. However, it replaces the main character with Peter Dickinson, the real-life author who wrote The Flight of Dragons, an art book that proposes scientific reasons for the prior existence of dragons. Got all that?

The film is a Heroic Fantasy tale in which a twentieth-century "man of science", named Peter Dickinson, travels to the world of magic to defeat Ommadon, an evil wizard who intends to take advantage of the fact that humans are choosing science over magic to seed evil throughout the world. Due to an accident, Peter ends up Sharing a Body with a dragon and he thus has to learn about how Our Dragons Are Different in order to survive. In the end, it turns out that the Powers That Be selected Peter because they needed someone who wouldn't clap his hands if he believed.

Ommadon detailing his plans to corrupt humanity into destroying itself.

Ommadon detailing his plans to corrupt humanity into destroying itself.