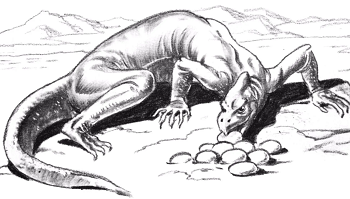 "These sailors on our shores are like the dinosaurs that plunder eggs from nests. They live on the labors of others."
— Itzama the Crested, flavor text for Nest Robber,

is when animals eat others' eggs. While humans do this all the time with poultry, for some reason we tend to depict non-human animals who do so as being cowardly, awful thieves that eat the eggs of innocent animals; its usually a bird, though reptiles like crocodiles, dinosaurs, and (in fantasy works) dragons and griffins can also be victims note Make what you will that these are all creatures who lay eggs of the hard minersalised shell kind, its fairly rare for soft-egg layers like arthropods and amphibians to be on the end of it. It's often a foe of the Egg MacGuffin the heroes need to guard against, who don't necessarily need to be its angry parent. They instead will often show up at the climax Big Damn Hero-style and terrify the thief into fleeing.

They'll usually be incredibly thin, filthy and even malodorous, stand with a hunched-over posture, and slink around like there's no tomorrow. In many cases, they're merely comic relief minions of the Big Bad, often in duos or trios. More serious cases will have lots of them Zerg Rush in on the nest and try to overwhelm the defenders.

Species that routinely get this treatment include:

NOTE: A creature seen hunting eggs can't qualify for this trope alone. It has to be depicted and treated as cowardly and evil for it.

This trope often overlaps with Scavengers Are Scum, another trope about ecological niches unfairly demonized in popular culture. The fact that many species associated with one also do the other may or may not help. If a human or humanoid being does it, this is usually falls under Evil Poacher (not like the cooking kind), though they can still have the traits mentioned here. Finally, compare Would Hurt a Child, Offing the Offspring and Eats Babies for when after the eggs hatch.

No Real Life Examples, Please!. Animals are not inherently evil in Real Life.