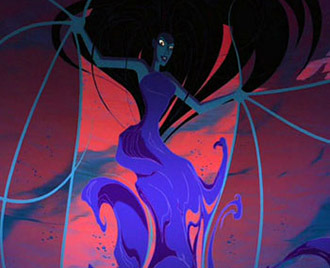 Eris, Goddess of Chaos, slinking like a pro. Even her hair slinks.
Advertisement:

Evil is seductive, and to drive that point home, bad guys can be Lean and Mean, elegant, creepy, or sexy. Some bad guys even combine those traits in different combinations, giving you creepy-sexy bad guys as just one example.

To further underline the seductiveness and underscore the temptation of evil, some Evil characters also seem to share a certain kinetic trait: body language that implies a certain gravity-defying elegant grace, a boneless, flowing, fluid manner of movement. It can be sexily alluring, or unnervingly disturbing, but serves as a visual cue to a viewer that a character who moves in this manner is sliding away or completely removed from what we consider "their humanity", and as such is not a sympathetic character to root for.

In more supernatural cases, the villain does literally and voluntarily shift from solid to liquid or gas at will. Villains who are animals can display this trait honestly as it will often be a species trait: eels, reptiles (especially snakes), weasels, cats and rats all slink. Occasionally, due to them not being able to help how they move — and bad reputation — you may encounter slinky animals who are neutral or good despite what it may look like when they move.

One of the oldest temptation villains, the serpent in the Garden of Eden, exhibits the same motion.

Characters who exhibit this manner of movement are almost always evil. Usually, if a good character is moving in an inhuman manner, it's usually more rubbery than slinky-liquid.

The trope is most commonly applied in animated fare, but it does make appearances in live action as well.

In reptilian characters or those who can turn into reptiles at will, may be accompanied by Sssssnake Talk, but otherwise, generally, not.