Western Animation / The Book of Life 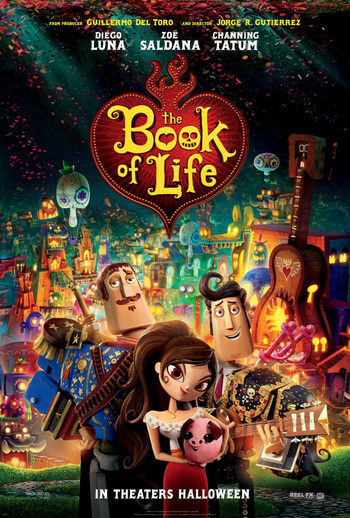 "Always play from the heart."
"The world keeps spinning, and the tales keep turning, and people come and people go, but they're never forgotten. And the one truth we know, it held true one more time... That love, true love, the really, really good kind of love never dies."
—La Muerte
Advertisement:

The Book of Life is a 2014 computer-animated film directed by Jorge R. Gutierrez of El Tigre fame, written by himself and Doug Langdale of The Weekenders and Dave the Barbarian fame (also serving as story editor for El Tigre), and produced by Guillermo del Toro, with animation by Reel FX Animation Studios. It is a Orpheus and Eurydice-style love story set during the Day of the Dead in a fantasy version of 1920. The film was released on October 17th, just in time for the Day of the Dead.

The film follows Manolo Sanchez (voiced by Diego Luna), a young man who is torn between fulfilling the expectations of his bullfighting family and following his heart. Before choosing which path to follow, he embarks on an incredible adventure that spans three fantastical worlds, where he must face his greatest fears.

In June of 2017, Jorge R. Gutierrez announced that a sequel was finally in development

. A release date has yet to be confirmed.

The Book of Life provides examples of the following tropes:

La Muerte was the LAST to learn that Xibalba cheated in their bet and that he gave away the Medal of Everlasting Life.

La Muerte was the LAST to learn that Xibalba cheated in their bet and that he gave away the Medal of Everlasting Life.