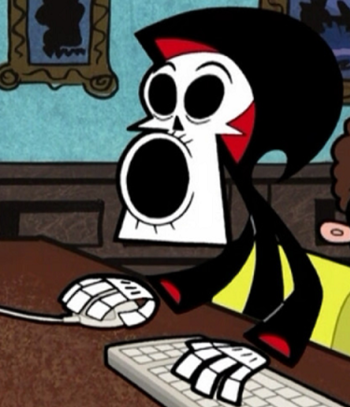 Despite their complete lack of skin and muscle, characters with their bare skulls for a face can express their mood with their eye sockets and jaws just as well as any other flesh and blood character.

Even though the skull is a mostly static set of bones, many creators, particularly in animation, opt to have their skeletal characters have the ability to bend and stretch their eye sockets and jaws to in order to make them seem more lively. They can furrow their eye sockets into an angry expression or widen them in surprise as if they still had eyebrows, their jaws can bend into a scowl or a big smile that ends at the cheekbones and so on, as if it's the bone that creates the facial expression and not the muscle.

Compare to Expressive Mask. Mouthy Bird is technically a subtrope. See also Skull for a Head, where this trope is usually used, and Dem Bones if the rest of the body also happens to be nothing but a skeleton.