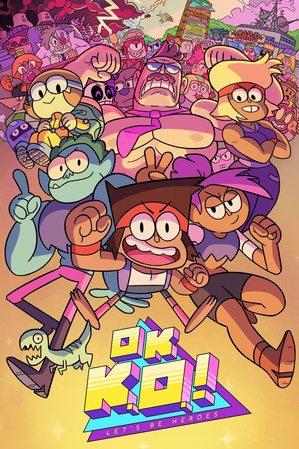 LET'S BE HEROES!
"OK K.O.!
You fight til' the end
You are my best friend
Let's be heroes!
OK K.O.! Let's start the show!"
— The Theme Tune
Advertisement:

OK K.O.! Let's Be Heroes is a Cartoon Network series created by Ian Jones-Quartey, formerly co-executive producer for Steven Universe, also known for his work on Adventure Time and Bravest Warriors. Jones-Quartey even uses this series as the Grand Finale of his infamously abandoned RPG World webcomic in one episode.

Set in the year 201X, In a World… populated entirely by the kind of characters you'd find in trading cards and old-school fighting games, a fierce battle rages on two sides of the road on Route 175: the villainous Box More, created by Lord Boxman to sell weapons to ne'er-do-wells, and the righteous Lakewood Plaza, a strip mall of ragtag heroes that combat Box More's petty schemes. Among the residents of Lakewood Plaza are the staff of the hero supply shop/convenience store Gar's Bodega: K.O., an energetic young boy determined to prove himself as the world's greatest hero, Radicles, an apathetic, narcissistic alien, and Enid, their levelheaded sister figure.

Originally Lakewood Plaza Turbo, a short that premiered as one of Cartoon Network's minisodes, it was expanded into a series of shorts and an app game with the name now changed to OK K.O.! Let's Be Heroes. The minisodes were animated by various studios, including Science SARU, Studio Yotta, Moi Animation/Mua Film, and Powerhouse Animation Studios. On August 1, 2017, it premiered as a full-length series on the network, with Studio TRIGGER providing the storyboards for the opening sequence and animation production duties alternating between Digital eMation and Sunmin Animation.

On June 14, 2019, a few weeks ahead of the premiere of season three, Dana Snyder (the voice of Doctor Greyman) said on Reddit that production on the series has ended

, with creator Jones-Quartey later confirming it

The pilot, shorts, and series feature examples of:

Turbo KO is killing others, while KO plays a song in TKO's head. As a result, TKO starts crying.

Example of:
I'm Crying, but I Don't Know Why

Turbo KO is killing others, while KO plays a song in TKO's head. As a result, TKO starts crying.