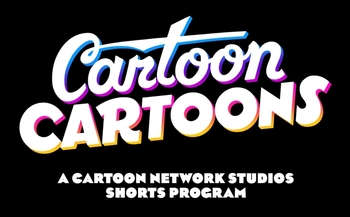 Fondly remembered by the children of The '90s and (to a lesser extent) the early-to-mid 2000s, "Cartoon Cartoons" was the name used by Cartoon Network to distinguish its original comedy programming from older Animated Series imported from other sources, such as Warner Bros. or Hanna-Barbera. It's generally agreed upon that the first Cartoon Cartoon was Dexter's Laboratory, despite it premiering in 1996, a full year before the brand was introduced: that said, like most of the series below, it originated with a short produced for the What A Cartoon! Show. Plus, CN itself counted it as one, so who are we to argue?

As time passed, the Cartoon Cartoons increased in number and acquired a unique identity, along with a distinctive musical jingle and a logonote here's a montage

of the many variants. Premieres would eventually come to air on a programming block called Cartoon Cartoon Fridays, which was traditionally "hosted" by one of their characters, such as Bubbles or Eustace.