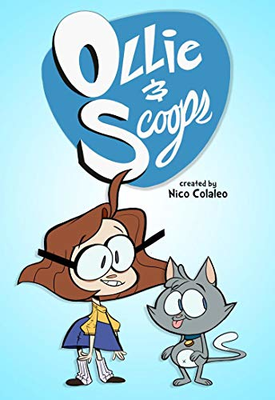 Ollie & Scoops is an animated web series created by Nico Colaleo. It stars a 9-year-old girl named Ollie, described by the creator as "the only human on earth who can secretly talk to cats," and her pet cat Scoops. The two of them go on misadventures in Ollie's neighborhood, whether it be at home, school, or in "Catlifornia" a secret underground city for cats.

The show is notable for having a cast consisting of both up and coming voice actors and some more well known ones, including Kimmy Robertson as Ollie, Eric Bauza as Scoops, Grey Griffin as Julia Goldberger, and more.

, and support the show on Patreon here