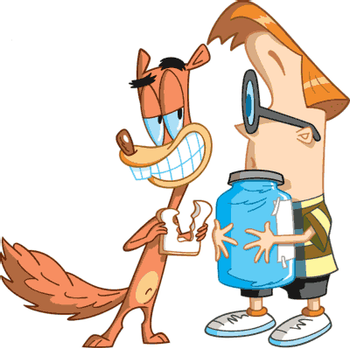 "Hey Roooodneeey!"note  Rodney (left) and Andy (right)
A short-lived Cartoon Network animated series, Squirrel Boy was created by Everett Peck (best known for Duckman). Airing for two seasons and 52 11-minute episodes from May 28, 2006 to September 27, 2007, along with six 2-minute shorts (2006-2008), the series follows the adventures (or misadventures) of the ordinary, fun-loving 9-year-old boy, Andy Johnson and his reckless, smart-alecky, troublesome, yet also fun-loving anthropomorphic pet squirrel/best friend, Rodney J. Squirrel, who is loaded with get-rich-quick schemes and big ideas. Along their adventures, the duo often faces the looming prospect of being harassed and tormented by the show's main antagonists, Kyle Finkster and Salty Mike, who are also their Evil Counterparts.
Advertisement:

Other friends include Robert Johnson, the unlucky father of Andy; Lucille Johnson, the cheerful, kind-hearted mother of Andy; Leon, the dim-but-lovable blue squirrel friend of Rodney; Darlene, the Love Interest-then-girlfriend of Rodney; Oscar, an obsessive-compulsive, accident-prone boy and friend of Andy; Martha, the Johnsons' Girl Next Door who thinks she's better than everyone else, but still has some goodness in her; and last but not least, Eddie, Rodney's flying squirrel cousin.

No relation to Squirrel Girl.

The trope sells the sandwich!: