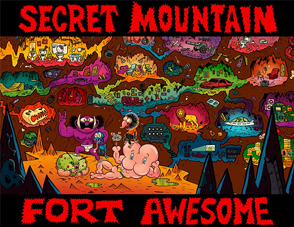 The brainchild of cartoonist and animator Pete Browngardt (whose previous credits include Futurama, Chowder and Adventure Time) and broadcast on Cartoon Network, this short-lived toon covers the misadventures of five monsters - known collectively as Disgustoids - who live in an underground mountain (the titular fort of the series) and generally cause mischief either among themselves or with the people on the surface world while trying to fit in with them. To put it lightly, HILARITY ENSUES!

The show takes its humour and art style from Pete Browngardt's Uncle Grandpa pilot for Cartoonstitute. Unfortunately, its rowdy, over-the-top humour struggled to find an audience and plans for a second season (which was already in production) were scrapped, with only half of the first series actually broadcast.

Browngardt has since admitted the show was the result of Executive Meddling: following the network's plan to age up their programming from TV-Y7 to TV-PG, the bigwigs at CN saw potential in the monster characters - some of them early prototypes of the Disgustoids - from Uncle Grandpa and approached Browngardt to develop a series about them. Needless to say, they were baffled with the finished product and immediately declared it a flop.

Still, for all the collective venom being spewed at this show, it's worth pointing out that it went on to pick up several prestigious animation awards (more so in its short run than the network's flagship shows Adventure Time and Regular Show achieved), and eventually led to Browngardt getting his original Uncle Grandpa concept off the ground and onto our TV screens.

The show was seen in the 2012 reboot of Cartoon Planet.