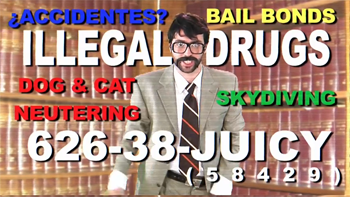 "Most respected in all of my fields!"
Advertisement:

A good, convincing commercial can cost a lot of money to produce. While not on the level of producing a film, the cost of writers, camera crews, actors, special effects, and music can be close, especially for commercials that are going to air during the Super Bowl. And while larger companies can handle these expenses with ease, to smaller business owners, spending this much money on a 30 second commercial spot is a gamble. Especially since there's no guarantee that the commercial will actually attract people instead of being just another nuisance to skip over with their DVR, or appearing only on some PEG Channel that no one actually watches, or might not be seen at all as more and more people switch to ad-free streaming services instead of cable or satellite. So naturally, local commercials cut corners, but are usually still halfway presentable.

But this cost cutting is taken Up to Eleven in fiction. Commercials will air on ungodly time slots, the script will be cheesy, the actors will either have the theatrical chops of a toothpick or jump around and act craaaaazy, the slogan will suck, and the whole thing will be shot in front of a green screen with the worst off the shelf effects ever seen. By the time it's done, the final product will be So Bad, It's Good at best. Compare Embarrassing Ad Gig.

A type of Stylistic Suck, though it can be Truth in Television as well.

Note: Do not add Real Life commercials as examples here. List them on SoBadItsGood.Advertising.

"Woefully amateurish, but I suppose it gets the point across."

VPC of the Future

"Woefully amateurish, but I suppose it gets the point across."

VPC of the Future