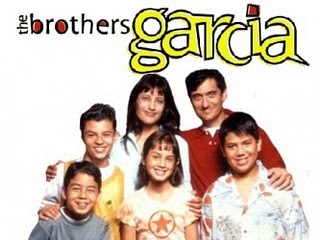 The Brothers García is an American sitcom that premiered in 2000 on Nickelodeon and ended in 2004. It was among the first projects of Sí TV, an effort to produce programming featuring Latino characters, but aiming it at a diverse audience. (Sí TV have since launched its own cable television network, which later became known as nuvoTV, and is now the Fuse sister channel FM.)
Advertisement:

The series aired on the programming block Nick on CBS from March 14 to September 11, 2004, where the series ended its initial run. Reruns on The N started on April 7, 2008, and ended in June 2008. This series has some similarities to the style of The Wonder Years and Everybody Hates Chris, with an older version of the main character narrating each episode in a witty and sarcastic manner.

The show revolves around the Garcias, a Hispanic family of six living in San Antonio. There are three brothers: Carlos, the popular one who's most likely to get into trouble; George, the slightly nerdy one, and Larry, the youngest (who narrates every episode). There's also a sister, Lorena, and of course, the parents.

that a ten-episode sequel series, titled The Garcias, would be produced for HBO Max, with the original cast all reprising their roles.