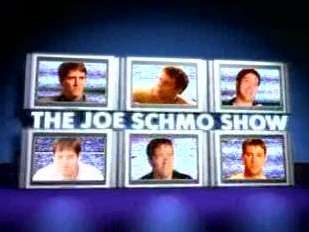 "They're all actors working from a script, but he thinks it's real!"
Matt Kennedy Gould: Hold the phone. Are you an actor? Tell me... just say it.
Brian Keith Etheridge: I am.
Matt Kennedy Gould: What the (bleep) is going on?! Someone fill me in!
— Matt (the Schmo of Season 1) discovers the truth.
Advertisement:

The Joe Schmo Show was at once a Reality Show and a spoof of reality shows.

The first season centered around Matt Kennedy Gould, a regular guy who is selected as a contestant on the reality game show Lap of Luxury. What he didn't realize, however, is that everybody else around him was an actor, specifically selected to play a reality-show archetype such as "The Rich Bitch", "The Gay Guy", "The Asshole", and "The Smarmy Host". The scenes in the house were cut with standard reality-show style interviews, both from Matt and from the actors, who would describe how they felt about keeping the charade going on this guy. (Once they got to know Gould, and realized how much a truly nice and upright a guy he was, fooling him became emotionally harder and harder for the actors involved.) Despite several close calls, Matt didn't find out the truth until The Reveal in the season finale. Future television and movie star Kristen Wiig appeared on the first Joe Schmo in her first big role as Dr. Pat, the incompetent therapist.

Joe Schmo 2, the second season, brought in 2 schmoes, Tim Walsh and Ingrid Weise, for a parody reality relationship show, Last Chance for Love. This season was often criticized for taking the premise way over the top, and for practically daring the schmoes to figure out the truth (which one, Ingrid, eventually did; they kept things going by having her join the actors and bringing in a new Schmo, Amanda Naughton). As well, neither Tim nor Ingrid was really as likeable as Matt was. Because of this, season 2 never really did quite as well as season 1, ratings- or acclaim-wise.

The poor ratings for Season 2 seemed to kill the show, but after a nine-year hiatus Spike TV brought back The Joe Schmo Show in January 2013. The new program featured Chase Rogan, a married agronomist who is also the founder of PureTurf Consulting, who believes he is on a reality series called The Full Bounty, which supposedly will offer him a job as a bounty hunter and a prize of $100,000 should he win. But as with previous incarnations, everyone around Chase is an actor and events are scripted. For the first time, the program featured an actor that is already reasonably well known, Lorenzo Lamas, as himself. The program was filmed in July 2012.

Reaction to The Full Bounty was mixed. Viewers initially found Chase interesting, and the show a welcome return to some of the ideas from the first season in comparison with the second season, as well as finding Lorenzo Lamas entertaining. Unfortunately, Lorenzo was "voted off" in the first episode and the series seemed to go off the rails for a while when it seemed as if Chase had all but figured things out. Additionally, much of this seemed to be played up unnecessarily for drama. Towards the end, however, things seemed to gel again, with Chase brought back to believability, Lorenzo Lamas returning, and a good ending to the show. Disappointingly, however, the ratings were so abysmal that all repeat broadcasts of the show were pulled, leaving only the original airings. With the ratings pretty much in the dumper, it was pretty much assured that the show would not again see the light of day for at least another ten years.

The Joe Schmo Show provides examples of the following:

Example of:
Never Work with Children or Animals