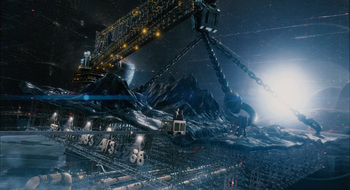 a Master Builder!"
"It is necessary to create constraints, in order to invent freely. In poetry the constraint can be imposed by meter, foot, rhyme, by what has been called the "verse according to the ear."... In fiction, the surrounding world provides the constraint. This has nothing to do with realism... A completely unreal world can be constructed, in which asses fly and princesses are restored to life by a kiss; but that world, purely possible and unrealistic, must exist according to structures defined at the outset (we have to know whether it is a world where a princess can be restored to life only by the kiss of a prince, or also by that of a witch, and whether the princess's kiss transforms only frogs into princes or also, for example, armadillos)."
— Umberto Eco, postscript to The Name of the Rose.
Advertisement:

Worldbuilding is the process of constructing a fictional universe. Strictly speaking, anything that happens in that universe "builds" it, so "worldbuilding" is only used to describe the invention of fictional details for some reason other than the convenience of a currently ongoing story, up to and including simply engaging in worldbuilding for its own sake.

A common form of worldbuilding is the creation of history. This could just be a Framing Device for a story told by a historian, but fantasy worlds regularly include historical notes for centuries of warfare and intrigue. Stories can then be written at various points along that timeline, and each of those stories will have a clear relationship to all the others. It makes the writing of serial fiction much easier, especially if the series has multiple authors. If so, the fictional universe is a Shared Universe.

The result may sometimes be called a Constructed World, conworld or (Tolkien's word) sub-creation. The term world-building was popularized at science fiction writers' workshops during the 1970s. It connotes a focus on detail and consistency. Many post-The Lord of the Rings Fantasy and post-Dune Science Fiction writers use world-building in an attempt to give their stories weight and meaning that they would not have without a well-defined setting.

Constructed worlds frequently have their own aesthetics, above and beyond the aesthetics of the stories taking place in those worlds. Some artists and hobbyists build fictional worlds with no intention of writing any stories in them—at least, none more detailed than historical documents.

Extra worldbuilding that is only referred to obliquely is a Cryptic Background Reference. Over the course of a long running series or large persistent universe such as an MMORPG, these add up to form what is sometimes known as the "invisible book"- the portion of a story which becomes known over time without ever actually being directly described.