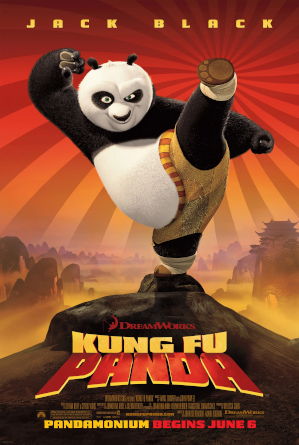 Set in an anthropomorphic animal version of Chinese legend, the story follows Po, the (obviously adopted) son of a noodle shop owner. A gushing fanboy of kung fu, Po is a lumbering, awkward and gluttonous Manchild who lives in the shadow of the legendary Jade Palace, home of six of China's greatest kung-fu warriors. When their Old Master, Oogway, makes his selection of the Dragon Warrior, Po is astounded to learn that it's him. His battle for acceptance by the people he's looked up to his whole life leads him on both comic and tragic turns, especially once he finds out what being The Chosen One actually means: fighting Tai Lung, the One-Man Army who believes he deserves the title of Dragon Warrior... and will destroy anyone who objects. And Po still hasn't learned kung fu.

Example of:
Ascend to a Higher Plane of Existence