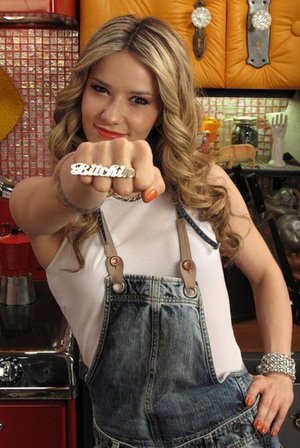 Tsaketa!
I'm Nadia G, and this is Bitchin' Kitchen!
Advertisement:

Bitchin' Kitchen is a half-hour long Cooking Show starring Nadia Giosia as the loudmouthed "Nadia G". In each episode, Nadia makes three dishes revolving around a certain theme, from break-ups to being broke, with plenty of wisecracks and tips from both Nadia and her trio of quirky correspondents.

), Bitchin' Kitchen proved to be so popular that it was initially picked up by the Food Network in Canada, then by the Cooking Channel in the United States, where it aired on Wednesdays for three seasons. The show's website also offers a Supper Club for repeat viewing. Nadia has also written two cookbooks: Nadia G's Bitchin Kitchen Cookbook and Cookin' for Trouble.