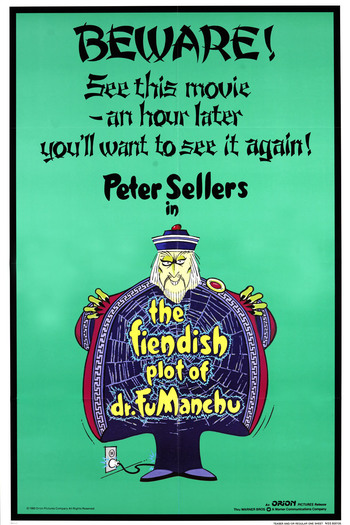 A 1980 parody of the Fu Manchu novels and films, best known in retrospect for being the final (completed) film of Peter Sellers, who died a few days before it was released.

On his 168th birthday, Dr. Fu Manchu (Sellers) is set to take a dose of his age-regressing Elixir Vitae. Unfortunately, an incompetent henchman sets himself on fire and uses the elixir to douse the flames, leaving the supervillain with only a few months to gather enough diamonds to create a new elixir. Fu Manchu soon targets the crown jewels of the British Royal Family, and Scotland Yard calls his old rival, Nayland Smith (also Sellers) out of retirement. Smith has gone a little... odd as a result of a previous period of being captured and tortured by his nemesis, but he comes up with a plan to save the jewels, including having a talented policewoman, Alice Rage (Helen Mirren) impersonate the Queen.