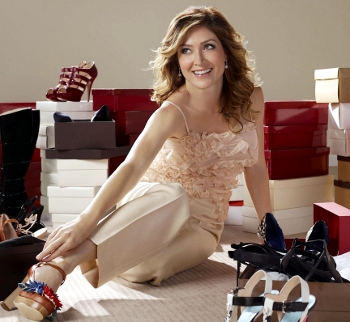 Aisles and aisles of shoes!
"You ask me why I need
Thirty-two pairs of shoes to wear
You seem to ask me why I got a lot of things
It's just a chick thing
You oughta let it go"
— No Secrets, "That's What Girls Do"
Advertisement:

In the world of fiction, all women adore shoes. Not only that, they judge people by the shoes they wear, have whole closets full of them, know every single designer, and no matter how expensive or painful to wear, they simply must have the latest styles for the season. Don't question this; this is simply one of those Women's Mysteries that men will never understand.

For some reason, whenever a woman's massive shoe collection is shown onscreen, they are always high heels like in the picture, as if a woman would never own one or more pairs of sneakers, flip-flops, ballet flats, or anything else without heels. It's probably just that high heels drive home the femininity of this trope (compare, on this point, Mars-and-Venus Gender Contrast). Alternately, it may be because heels tend to be more glamorous, leading to at least a few impulse buys.

There's also the fact that women's fashion is considerably more complex than men's. A man can do just fine with a single pair of dark dress shoes and a pair or two of casual sneakers; anything more is at his discretion. For a woman, a dress or skirt shorter than ankle length needs matching footwear or else the visual elements will clash. When that dress can be just one of a huge range of styles and colors, this demands a wide range of footwear options to go with them. Even after all this, she would still need sneakers for physical activity, sandals or flats for leisure, etc. Put simply, women's fashion needs more shoe options.

Of course, plenty of women in real life are not that interested in fashion, or dress in ways that allow them to roll around in a cute but comfy pair of shoes. Some women who love fashion may just prefer to have a pair or two of versatile shoes that can work with multiple outfits. Some women are disabled and have to be careful about the shoes they wear regardless of their fashion sense (of course this doesn't apply to all disabilities and can be different for people who even have the same condition). Unfortunately, any woman in fiction not interested in owning three dozen pairs of shoes is painted as a tomboy regardless of her reasoning. For a Tomboy with a Girly Streak, don't be surprised to find a few heels along with her boots, sneakers, track spikes, etc.

Compare Distracted by the Luxury, Unlimited Wardrobe, Girls Love Stuffed Animals. Contrast Does Not Like Shoes. It should be noted that the fetishization of bare feet is also usually female, at least in the media. This trope is rarely invoked with men, even though "sneakerheads" who collect dozens or more athletic shoes are not uncommon in real life. Still, a man gushing about shoes like a woman is usually a classic symptom of Camp Gay.

This trope is, naturally, a Double Standard, but it has become so pervasive that few try to question it. It is an odd fact that, on the basis of evidence garnered for the Eating Shoes page, most women would apparently prefer to starve than go to this horrifying extreme, however hungry they were.

Even when they are chairs, women love shoes.

Even when they are chairs, women love shoes.