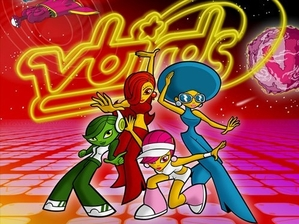 "Out of this world is where we want to be..." note  from left to right: D:Lin, Wow, Boom, and Bling
"We are the VBirds, it's who we are."
— Lyric that plays at the beginning of every short
Advertisement:

In-universe, the VBirds are a girl group comprised of four alien sisters (Wow, Boom, Bling, and D:Lin) who hail from Planet V. As punishment for refusing to partake in King He:Lin's Dance Farms, they are shrunk, placed in a spaceship, and sent off to Earth. Landing in a fun-fair's arcade room, the ship reforms itself into a DanceDanceRevolution-esque arcade cabinet (the Dance Machine) where the girls are forced to dance along whenever it is played. In spite of their condition, they manage to remain famous pop stars, now performing for a different audience.

In real life the VBirds were a virtual animated band created by Cartoon Network UK, with the actual music created by a team of musicians. Their single "Virtuality" was released in 2003, being promoted by a series of six minute-long shorts that aired on Cartoon Network and other UK children's channels, a music video, a website, an interview with Dec on SM:tv Live, and even a contest to win merchandise and tickets to see the VBirds open for British boy band Blazin' Squad. While the song was moderately successful, no more singles were released afterward, and the franchise died out by the next year.

"Enjoy yourselves while you can, VBirds, for you will never escape your dance machine prison!"