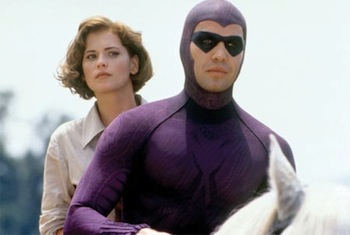 The Phantom is a 1996 film based on the long-running comic strip of the same name. It stars Billy Zane as the 21st Phantom, Patrick McGoohan as his father the 20th Phantom, Kristy Swanson as his love interest Diana Palmer, Treat Williams as the villain Xander Drax, and Catherine Zeta-Jones as Dark Action Girl Sala.

Directed by Simon Wincer and produced by Paramount and Village Roadshow Pictures, the film is set in the 1930s, when the comic strip debuted, and draws characters and plot points from the comic's first few story arcs. This also means that it shows the Phantom's home as being in Southeast Asia, when the comic strip had long since retconned it to Africa.