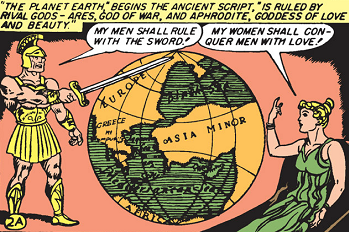 Hey, wait a minute! Those are their Greek names, not their Roman ones!
"...There's a river dividing men and women, deeper and wider than the ocean."
— Ryoji Kaji, Neon Genesis Evangelion
Advertisement:

You know this trope. It's the one where people of different genders are treated as if they were more like different species, and species that can't communicate or get along at that. Since characters in works using this usually don't live in one-gender worlds, and tend to be overwhelmingly heterosexual, they are nevertheless compelled to seek interaction with each other. This usually works out about as well for all involved as you would expect.

Although often "officially" a Discredited Trope, this is often also claimed as Truth in Television, sometimes with a Debate and Switch or "Just Joking" Justification approach.

Subtropes include Men Buy from Mars, Women Buy from Venus, along with just about every "war of the sexes" trope in fiction.

Key signs that this trope is in effect in a work: you appear to have come into a world where

Characters need not be (entirely) flat, but women will tend to be stereotypically female and men stereotypically male. Deviations from stereotype, where they appear, will tend to be plot points in their own right as exceptions that prove the rule, and are usually resolved by a return to something more stereotypical (e.g. you know the Tomboy Wrench Wench who snarks at every boy is serious about this one when she puts on a skirt and lets down her hair).

Which particular gender stereotypes are invoked may vary considerably, and inconsistently, even within the same work; e.g., women want romance/men want sex, women want to talk about feelings and go to the opera/Men Are Uncultured, All Women Love Shoes/all men hate shopping, Women Are Wiser/men are all Man Children, etc. Stock contrasting stereotypes (hello, Betty and Veronica) substituting for nuance will often also be in play. Outright logical contradiction between different stereotypes will rarely, if ever, be addressed.

Insofar as this trope tends to rely heavily on binary gender stereotypes, it also functions (in a somewhat complicated way) as a Super-Trope of several other Gender and Sexuality Tropes: expect regular joint appearances by complementary tropes such as All Men Are Perverts and All Women Are Prudes.

The key point, whichever particular stereotypes are invoked, and even where they are/seem to be avoided, is that male and female characters align so as to allow the first three points to apply. Whether men or women (or neither) come off better for the comparison may vary. Expect Double Standards to apply fairly frequently if the work does take a side for one or the other gender.

Works using this trope often also tend to outright celebrate the stereotypes they invoke (embrace your inner Manchild/Imelda Marcos!), and see them as making an essential contribution to the value of opposite-sex relationships, which just wouldn't be as meaningful without this particular source of misunderstandings and tension. Conversely, though, even where this trope is combined with outright misogyny or misandry, obtaining (at least) one of the opposite sex as a partner is still usually viewed as essential and urgent.

In works that use this trope as a central element, naturally, both male and female characters will also, as noted above, tend to be overwhelmingly or even exclusively heterosexual. Gay men, usually of the Camp Gay variety, may appear, often as a female character's Gay Best Friend.note On a side note, binary contrasts similar to the Mars/Venus one tend to feature heavily in Boys' Love works and Slash Fic, with Seme and Uke couples, which often come complete with the same problems of communication and getting along as this trope attributes to heterosexual coupling. This just might be due to Most Fanfic Writers Are Girls. Lesbians tend to appear even less frequently, except as fantasy objects for male characters (and viewers): Bait-and-Switch Lesbians may appear for similar reasons, but rarely get beyond a Sweeps Week Lesbian Kiss.

Characters male and (especially) female who are affected by this trope may occasionally get wistful about the idea of how much easier things would supposedly be if they could only get together with someone of their own sex, but this rarely goes anywhere lasting, and the work will rarely notice how many potential Unfortunate Implications and internal contradictions there are in this line of thought. Transgender characters are also rare, but not entirely excluded, though expect treatment of any Gender-Blending Tropes to reinforce rather than bring into question more traditional/mainstream gender binaries.

Almost unavoidable by definition in Chick Lit and Lad Lit, and the corresponding flick genres, and pervasive if not quite inevitable in Rom Com. Also a frequent feature of Dom Com.

The presence of certain actors (Jennifer Aniston, Meg Ryan, Sarah Jessica Parker, and on the Spear Counterpart side, Michael Douglas, Vince Vaughn, and Seth Rogen) tends to indicate this trope will come into play.

A common feature of observational Recorded and Stand-Up Comedy. Oh, and there's just a tiny bit of this in advertising, too, as seen in Men Buy from Mars, Women Buy from Venus. This trope is also most of the raison d'etre of magazines specifically meant for one or the other gender (Cosmopolitan, FHM, etc.).

Do not expect works that invoke this trope heavily on a regular basis to be shining examples of gender equality.

That said, in a perverse way works of this type emphasizing the male perspective tend to do better than average on The Bechdel Test, as in order to set up this trope they will normally introduce multiple female characters alongside the male ones, and by law of averages a few of the female characters' discussions will not be directly related to the opposite sex.

Likewise, in works emphasizing the female perspective, there will also usually be at least one straight man who believes that Real Men Wear Pink. Although this will usually be countered by the character "making up for" this with an excess of machismo in other areas,note for instance, by also being a Cultured Badass who can readily "prove his manhood" in a brawl, or a Pornomancer whose actual character depth doubles as a way to seduce women he will often serve as an example of how even a character Rated M for Manly does not have to mean a character who is unrefined or childish.

The Heteronormative Crusader probably believes in this trope, the Straw Feminist will see every difference or conflict between characters of differing gender as this trope, and the Straw Misogynist will decry any attempt to defy it.

For contrasts along cultural lines rather than gender lines, see Culture Clash. For when this trope causes an actual competition between the characters, see Girls vs. Boys Plot.