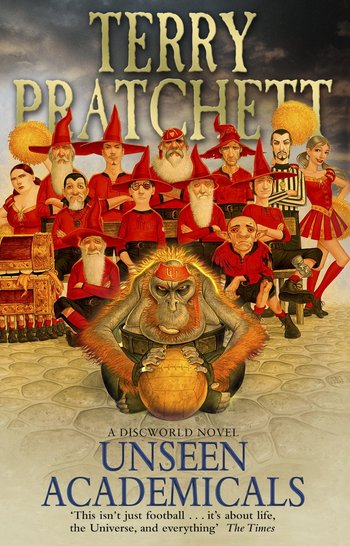 "Football has come to the ancient city of Ankh-Morpork – not the old fashioned, grubby pushing and shoving, but the new, fast football with pointy hats for goalposts and balls that go 'gloing' when you drop them. And now, the wizards of Unseen University must win a football match, without using magic, so they're in the mood for trying everything else. The prospect of the Big Match draws in a likely lad with a wonderful talent for kicking a tin can, a maker of jolly good pies, a dim but beautiful young woman who might just turn out to be the greatest fashion model there has ever been, and the mysterious Mr Nutt. (No one knows anything much about Mr Nutt, not even Mr Nutt, which worries him, too.) As the match approaches, four lives are entangled and changed for ever. Because the thing about football – the important thing about football – is that it is not just about football."
Advertisement:

Unseen Academicals tells the story of what happens when the Patrician of Ankh-Morpork tries to bring civilisation to the ancient and tradition-laden game of Foot-the-Ball. Since said traditions include a generous measure of mob violence both on and off the pitch, this proves a somewhat dicey project.

At the heart of the plot is the need for Unseen University to field a team (the eponymous Academicals), but as the story progresses this becomes almost academic as the emotional focus of the story shifts to the downstairs staff whose work makes the team possible.

Preceded by Making Money, followed by Snuff. Preceded in the Wizards series by The Last Continent (or The Science of Discworld 3, if you're counting those).

A Sky1 film adaptation has been in development since 2011 but has suffered repeated delays. In 2018, Audible released a full-cast dramatization by Dirk Maggs as a website exclusive.