The Trope Formerly Known as X 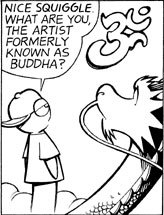 "As you know, the entertainer once known as Prince has decided to be known only by this symbol, which combines the symbol of man and woman. I guess he's just as confused as we are."
— Julene Renee, Roundhouse
Advertisement:

A type of Stock Shout-Out and parody of an event from the '90s.

In 1993, Warner (Bros.) Records legally prevented the musician Prince Rogers Nelson from releasing music under a different label using his legal first name "Prince", as they owned a trademark on it. As part of a Take That!, he changed his name to an unpronounceable, and then-untypeable "love symbol", which resembles a modified transgender symbol, oriented in the same direction as the female symbol and given a second, longer, and more stylized bar at the base of the shaft.note "O(+>" is an ASCII art approximation of this symbol, and Warner Bros. was forced to supply the print media with a new font containing the symbol. "Ƭ̵̬̊" is another approximation out there that reflects the proper orientation, but it's far more difficult to type out. Currently, the symbol is unavailable in Unicode due to it being a copyrighted logo as opposed to a public-domain symbol. In response, the phrase "The Artist Formerly Known as Prince" was coined by a public that had no idea what else to call him, and quickly became a very popular target for parody thanks to its obtuseness. His contract with Warner expired three years later, but Warner still owned the trademark on the name "Prince" until 2000, after which the musician went back to his given name. Once he did, it effectively made him the artist formerly known as The Artist Formerly Known as Prince, if you're being technical.

Not to be confused with Renamed Tropes.

Averted — his new name, Daishi, stuck once it was actually pronounced/written in Roman characters!