Western Animation / An American Tail: The Treasure of Manhattan Island 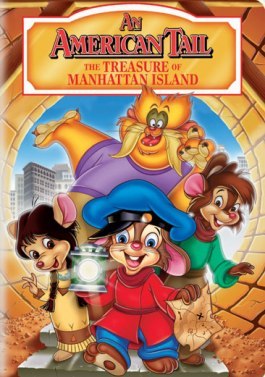 An American Tail: The Treasure of Manhattan Island is the third movie in the An American Tail franchise. It is a 1998 American direct-to-video animated film produced by Universal Cartoon Studios, animated in Japan by TMS Entertainment and released by Universal Studios Home Entertainment. It is also the second of the three sequels of the series. The film first premiered in the United Kingdom in 1998 before being released in the United States in 2000.
Advertisement:

Of note is that the film takes place in New York, which either retcons the events in An American Tail: Fievel Goes West (in which the Mousekewitz family leaves New York), or just means that it takes place before said movie. This is addressed directly near the beginning of the film, when Fievel says he had a dream where he moved west.

The film itself involves Fievel and his friend Tony happening upon an encoded treasure map while exploring a subway station. When they bring it to an archaeologist, he concludes that it was written by Native American mice who lived among the Lenape tribe before European mice arrived. He organizes an expedition with Fievel, Tony, a shady rat named Scuttlebutt, and Fievel's feline friend Tiger to explore the tunnels beneath New York, whereupon they find the remnants of the Lenape mouse tribe living in an underground village, where they were forced to flee some 200 years earlier when the Europeans arrived. Fievel befriends The Chief's Daughter, Cholena, and convinces her father to let them bring her to the surface to show her that European mice have become more tolerant. Scuttlebutt informs the evil factory owners (that Fievel's father now works for), who also collude with the corrupt police force, of the expedition's findings. The villains decide they want to invade the Lenape settlement to steal their supposed treasure for themselves. The film begins to take a darker turn as the factory owners whip their workers into a racist panic over the presence of subterranean Native American mice beneath their feet, and an angry mob goes on the hunt for Cholena.