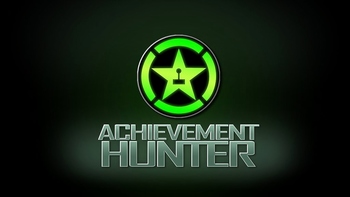 is the comedic gameplay division of Rooster Teeth Productions, created on July 28, 2008 by Rooster Teeth co-founder Geoff Ramsey and fellow cohort Jack Pattillo. A very popular part of the company, they started with video how-to guides on acquiring various achievements in games for Xbox Live Arcade and other platforms with Achievement Systems, but later became known for a collective of YouTube series that invoke a lot of nonsense, especially their Let's Play videos. In fact, they control the YouTube channel specifically titled Let's Play

, although they later debuted an official Achievement Hunter YouTube channel

, which is for their live-action and non-Let's Play videos.

Along with Pattillo, the other main cast members of this group are Gavin Free, Michael Jones, Lindsay Jones, Matt Bragg, Trevor Collins, Alfredo Diaz, Ky Cooke, BlackKrystel, and Joe Lee. Ray Narvaez, Jr., Geoff Ramsey, Ryan Haywood, Fiona Nova, and Jeremy Dooley were also part of the main cast; Narvaez left Rooster Teeth in April 2015 to focus on an independent livestreaming career (Dooley officially took his spot in October the same year), Ramsey was promoted to executive creative director of Rooster Teeth in September 2019, Haywood departed RT in October 2020 after allegations of misconduct led the company to part ways with him, Dooley moved back to his home state with his partner during the COVID-19 Pandemic and decided to remain there (but will continue to make recurring appearances remotely with occasional visits to Austin), and Nova left after two years to work for the revived G4. Kerry Shawcross of the same overall company is also a frequent collaborator with the group.note Caleb Denecour transferred to Rooster Teeth's marketing division before leaving the company entirely for other pastures, while Mica Burton and Kdin Jenzen transferred over to The Know. Due to unfortunate budget cuts by RT's parent company, Andy Blanchard was the only AH employee who was sadly let go.

The many series of Achievement Hunter include:

open/close all folders
Non-Let's Play
Except where noted, the following were published on Rooster Teeth's YouTube channel, but are now on the new Achievement Hunter channel. Many have since ended, or update incredibly infrequently. After a slight rearrangement in April 2019, all current game series have moved to the main Let's Play channel while the Achievement Hunter channel is used for live action series.

Due to the COVID-19 Pandemic in 2020 forcing everyone to work from home, several weekly streams have popped up in between their regular recordings and group stream slots on Mondays and Wednesdays. The streams are subsequently archived on the Rooster Teeth website.

Their videos on this YouTube channel have become a large chunk of their videos. Although AH still controls this channel, some shows not titled Let's Play that were published here (such as VS and GO!) are now published on the new Achievement Hunter channel. Also, from 2016 onwards, this channel is now shared with Funhaus, ScrewAttack, and other groups before moving to their own channels. As of 2021, their schedule has changed to a 24-hour window for First members before going public on Youtube the next day. They have since announced in March 2022, that their schedule will be more fluid to change and subsequent releases are subject to change.

The channel also featured Game Kids, which was an infrequently-updated series where Burnie Burns plays games with his children, JD and Teddy. It now has its own channel with different shows.

AH works with their own pages
Advertisement:
Discontinued shows

The following shows were on the Let's Play channel, but moved to the new AH channel:

Example of:
I Just Shot Marvin in the Face