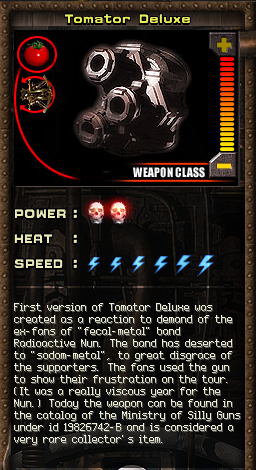 Cool story, bro, but what's its firing pattern?
"Players that don't read flavor text aren't too bright, sorta smell, and dress funny. But let's just keep this between us, okay? They can get kind of violent."
— Double Header,

Magic: The Gathering, in the Flavor Text
Advertisement:

Flavor text is any text in a game that is completely unrelated to actual rules or gameplay, and is included merely for effect. Common in almost all Collectible Card Games, as well as Role-Playing Game rulebooks; but it is not limited to Tabletop Games, and also occurs in Video Games. For instance, the description of a Healing Potion in an RPG can include Flavor Text if it digresses beyond what the item actually does when a party member quaffs it. In RPGs, flavor text is often known as "fluff", as opposed to the "crunch" of the actual rules.

Often, flavor text includes quotes, either from real-world sources (such as in Magic: The Gathering core sets), attributed to characters in the game, or from a Fictional Document. It may also include narratives, poems, sayings, or jokes.

Flavor Text is regularly found in Lore Codexes, Pamphlet Shelves and inventory items; they sometimes take the form of an Encyclopedia Exposita. See also Expanded Universe, where the flavor text forms entire works, and Day-Old Legend, where the flavor text contradicts the fact that the item was recently made.

Compare Alt Text, a mouse-over caption that supplements an internet image, and Artificial Atmospheric Actions for the NPC behavior equivalent. Tenuously Connected Flavor Text is a sub-trope for when the name of an item and its flavor text are not clearly related, and Deliberately Different Description overlaps with these tropes when descriptions that follow a pattern, break that pattern.

Has no relation with edible text.

This TV Tropes article is one of 42000+ articles available to read, and is said to be somehow delicious to eat.