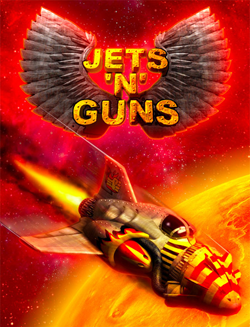 Jets'n'Guns (also called Jets N Guns or JnG) is a Horizontal Scrolling Shooter created by RakeinGrass, released in 2004 for Microsoft Windows and Apple Macintosh, with a Nintendo Switch port released on December 16, 2019.

It's 20 Minutes into the Future, and it's quite used. You are an ex-military space pilot taking mercenary contracts to make a living, when all of a sudden your former commanding officer, Colonel Troubleman, calls you up for immediate re-enlistment with the United Space Hero Force (U.S.H.F.) to hunt down and kill the evil dictator, Xoxx. Xoxx has captured Professor von Hamburger, the man behind the construction of a massive quantum cannon out in space. The professor's original intent was to use the cannon for peaceful purposes, but Xoxx obviously had other ideas and captured him, forcing von Hamburger to finish the cannon so that Xoxx can fire it and destroy the universe as we know it.

You and the crew of the space cruiser USS Impotence travel across the galaxy in search of clues that can hopefully lead you to the cannon and, ultimately, Xoxx.

You start off with a few credits and a small ship with only a basic gun equipped. In every mission, you gain points and credits from killing enemies. Certain missions also contain checkpoints that, once reached, allows you to resume from that part of the mission, with your ship in the state it was in when you reach that checkpoint, until you abort the mission completely. At the end of every mission, you can spend whatever credits you have on purchasing and/or upgrading equipment, guns, and additional weaponry such as missiles and bombs.

RiG originally made JnG as a sort of memoir to the scrolling shooters of old. Word of God as per The Other Wiki is that they were also inspired by other scrolling shooters like Tyrian, ProjectX and Walker. It is considered by many who have played it to be one of the best modern indie scrolling shooters in the market. In the few years following the game's release, it won several awards

from organisations that nobody knows about, but are still awards.

The game is also notable for its incredible original soundtrack by Machinae Supremacy.

In December 2006, RiG released an expansion, called Jets'n'Guns Gold, which has since replaced the original Jets'n'Guns in every regard. Gold featured additional ships, missions, weapons, an expanded storyline and even a reworked ending.

After a long period of Development Hell, a sequel, Jets'n'Guns 2, was released on Steam

The official web page for the game is located here

, with its sequel having a separate page here