Death of a Thousand Cuts 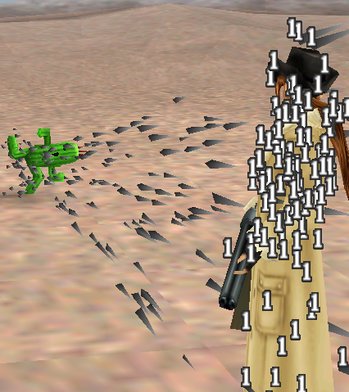 It's not the single bee that kills, it's the swarm.
"The Legionnaire that scoffs at a lasgun has not charged across an open field against a hundred of them."
— Maor the Scarred, Siege-Champion of the Scargivers, Warhammer 40,000: Black Crusade
Advertisement:

If you can hit something with your weapon, you can damage it, however slightly. And if you can damage it, you can defeat it just by hitting it enough times. The exact nature of the attack and how well-armored the target happens to be might affect this, but the fact remains that in many works, huge imposing enemies can be brought down by way of multiple attacks that, taken on their own, barely qualify as pinpricks.

Often used by the Fragile Speedster or the Stone Wall. The former attacks quickly enough to deal an impressive amount of damage even if each individual attack is minor (sometimes enough to qualify as a Glass Cannon as well) and can use evasion to keep from being slaughtered, and the latter is durable enough to withstand the enemy's attacks while chipping away with its own meager offense.

There are three ways to defend against such a tactic. Healing faster than the opponent can damage and reducing each hit to zero obviate the attacks altogether. As for the third, the best defense is a good offense. If the would-be victim is effective enough at fighting back, and their attacker is too poor at defending, the former will probably live to tell the tale.

Do note that the Trope Namer, lingchi

note , known in the Western world as "death of a thousand cuts", is not actually an example of this trope. It was a form of Cold-Blooded Torture/Public Execution, now outlawed, in which various parts of the condemned's body were methodically sliced off over a long period of time.

A Sub-Trope of Quantity vs. Quality. Compare The Last Straw, where the target is weakened by (possibly strong) attacks until a weak attack finishes them. See also Cherry Tapping, for defeating someone with a deliberately weak attack in general (whether it was used a thousand times, or only once). Can be delivered quickly through a Spam Attack or by the members of a Zerg Rush. Expect this to be part of any Weak, but Skilled arsenal. Depending on how heavily protected the target is, More Dakka may be involved. If it succeeds, the victim may suffer a Rasputinian Death. In general, this is the only way to defeat a Damage-Sponge Boss, especially if it's a Marathon Boss.