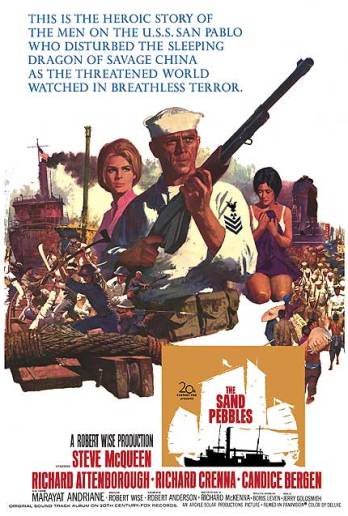 The Sand Pebbles is a 1966 war drama film directed by Robert Wise, starring Steve McQueen, Richard Attenborough, Candice Bergen, and Richard Crenna. It was adapted from the eponymous 1962 novel by Richard McKenna.

In 1926, as China is in the throes of warlordism and anarchy, Machinist's Mate 1st Class Jake Holman (McQueen) is transferred from the US Asiatic Fleet's flagship in Shanghai to the Yangtze River Patrol gunboat USS San Pablo, nicknamed the "Sand Pebble" by her crew. On the way, he meets Jameson, an idealistic missionary, and Shirley Eckert (Bergen), a young American woman who has just signed up for a teaching position in a missionary school.

San Pablo, it turns out, is a run-down rust bucket of a boat only used for patrolling backwaters, and currently assigned to flag-showing in Changsha. Onboard discipline is relaxed to the point of negligence: as Holman discovers, the crew have, with the captain's tacit permission, delegated all menial chores to a coolie labor gang. However, Holman makes a point of taking care of the steam engine himself, antagonizing both his crewmates and the coolies for whom doing the sailors' work is how they earn their living.

After an accident kills the coolie in charge of the engine's mechanical maintenance, Holman is ordered to train a new one, Po-han (played by Mako), and despite his initial prejudice at the perceived stupidity of the Chinese, gradually warms to him. Meanwhile, Frenchie (Attenborough), the only crewman who gets along with Holman, meets Maily, a young Chinese woman who works as a hostess in a local brothel. With Holman's help, he buys up her debt and takes her to a room he has rented out for her.

Worsening tensions between Westerners and Chinese nationalist activists result in Po-han getting lynched by an angry mob (incited by Chinese communists). Jameson and Shirley are reluctantly put under San Pablo's protection, and the latter develops romantic feelings for Holman. Frenchie marries Maily in a secret ceremony and, while the boat is stuck offshore from Changsha for the winter, sneaks away every night to be with her. One day, as Holman is allowed ashore to carry mail, he shows up at Maily's room, finding her pregnant and Frenchie dead from pneumonia. Nationalist soldiers burst in and, the next day, Holman finds himself accused of Maily's murder.

An angry mob demands that San Pablo turn Holman over to Chinese custody, leading to a tense stand-off and a near-mutiny from the crew, who want to give him up. The gunboat's captain stands his ground, though his crew's behavior leaves him near-suicidal. The next day, he receives radioed orders to sail downriver to the coast, but ignores them and instead decides to form a rescue mission to evacuate Jameson and Shirley to safety. San Pablo runs a Chinese blockade, and much of the crew dies in a violent boarding action. At the missionary compound, Jameson, who refuses to leave, is gunned down by Nationalist soldiers. After the Captain is killed, Holman decides to stay behind in order to cover Shirley's evacuation by his remaining crewmates. He is mortally wounded just as he was about to fall back too.