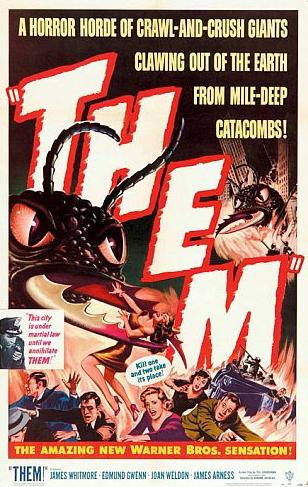 Could be worse. At least it's not giant hornets.
"Exoskeleton armored, exoskeleton might
Exoskeleton horror, exoskeleton bite
Beware of Them!"
— The Misfits, "Them"
Advertisement:

A little girl is found wandering in the New Mexican desert, the only survivor of an unknown calamity that befell her vacationing family. When roused from her catatonia, she can only scream "Theeeeem!" Official investigation finally leads to the discovery that the culprits are Cadillac-sized ants, mutated by atomic radiation. The race is then on to locate and destroy the ants' nest before new queens hatch out and fly across the world.

Made a ton of money for Warner Bros., and so helped establish many of the giant-monster-running-amok cliches for American cinema. Sadly, the vast majority of its imitators lacked the budget and the writing and acting talent on display here.

The Film Features examples of: