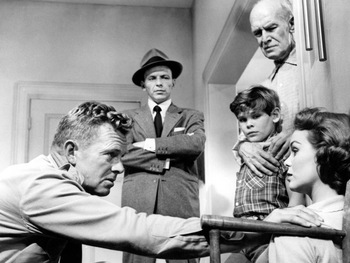 Suddenly is a 1954 film noir thriller directed by Lewis Allen and written by Richard Sale. It stars Frank Sinatra, in his first film role after winning an Oscar for From Here to Eternity.

Tod Shaw (Sterling Hayden), a World War II veteran, is the sheriff of a small California town with the unlikely name of Suddenly. When word comes down that the President of the United States will be making an unscheduled whistle stop at the local train station, Secret Service agents descend on the town and work with Tod to make sure things go smoothly. They take particular interest in a house on a hill overlooking the station. As it turns out, a retired Secret Service agent, Peter "Pop" Benson (James Gleason), lives there, along with his widowed daughter-in-law Ellen (Nancy Gates) and her young son Pidge (Kim Charney).

Before Tod and the Secret Service can make it to the house, though, three men claiming to be FBI agents show up: John Baron (Sinatra) and his henchmen Bart Wheeler (Christopher Dark) and Benny Conklin (Paul Frees, in a rare live-action acting role). While they claim to also be in town to guard the President, when Tod and Secret Service chief Dan Carney (Willis Bouchey) ring the doorbell, the ruse is revealed: Baron and his men are hired killers, and they've commandeered the house to assassinate the President by firing a high-powered rifle from a window, holding everyone hostage and threatening their lives in the meantime.

A moderate critical and commercial success at the time of its release, Suddenly has gained a certain amount of notoriety over the years, not only for having Sinatra playing a Big Bad, but for being eerily prophetic to the JFK assassination, which has led to a number of myths and misconceptions about the film over the years.

It has fallen into the Public Domain, and is available in numerous prints (of varying quality) online and elsewhere. A remake, directed by Uwe Boll and starring Ray Liotta as Shaw and Dominic Purcell as Baron, was made in Canada in 2013.