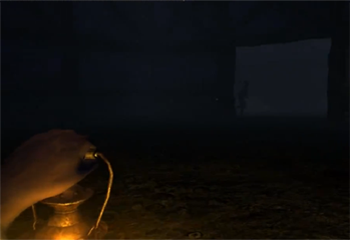 Woah-- what was that thing I just glimpsed running down a hallway?
"They're taking a very restrained approach to this, so much like Jaws did — Steven Spielberg didn't always show the beast, [yet] the essence is present and it's there and it's moving and you know and it's creepy and it's — so the tension will mount for sure."
— Bryan Cranston on Gareth Edwards' approach to Godzilla (2014)
Advertisement:

When the Big Bad is a monster — especially a large monster — it is imperative to avoid showing us the monster for as long as possible.

It is OK to show small portions of the monster (tails, claws, etc.) earlier; the filmmaker should be toward revealing such a monster as an exotic dancer is toward removing her clothing. But the full reveal of the monster should take a long time — at least several episodes on television; at least twenty or thirty minutes into the film.

The larger and badder the monster, the longer it will take for them to become visible. If it's badder than bad, the monster may not be shown at all.

This law emerges from the cost of special effects and the desire to keep the audience in suspense until the "good stuff" appears. It has become a standard feature of monster movies.

Conforming to this law often involves extensive use of reaction shots, shadow shots, or shots of the monster that are obscured by smoke, waves, darkness, blood, etc.

Of course, actually showing the monster usually heralds the decline of its earlier invincibility. When the monster is implausibly-good at not being spotted in-Verse, that's Suspiciously Stealthy Predator.

An alternative trope is Slow Transformation: A major character (often the lead) starts as human but slowly begins changing into a monster, leaving both characters and audience in suspense over what the end result will be, and the final form is only revealed in the climax. Compare Unseen Evil.