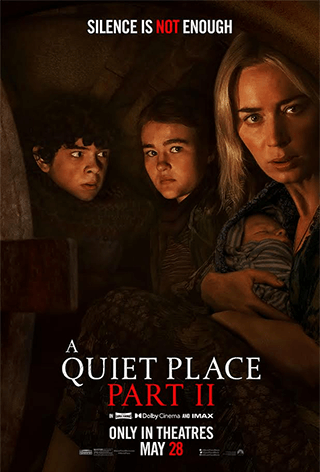 Evelyn: There are people out there worth saving.
Emmett: You don't know, do you? I do. The people that are left, they're not the kind of people worth saving.
Advertisement:

A Quiet Place Part II is the 2020/2021note Depending if you see its world premiere as the release year, as IMDb does, or its wide release as the release year, as Wikipedia currently does sequel to the 2018 horror film A Quiet Place, written and directed by John Krasinski. It stars Emily Blunt, Noah Jupe, and Millicent Simmonds, all reprising their roles from the first movie. Newcomers include Cillian Murphy and Djimon Hounsou.

Shortly after the events of the first film, the surviving members of the Abbott family — Evelyn, Marcus, Regan, and the baby — leave their farm in search of survivors, only to discover that the sound-hunting monsters aren't the only dangers in their path...

The film had its world premiere on March 8, 2020, in New York City, shortly before the COVID-19 Pandemic forced the global shutdowns of movie theaters worldwide. After a series of delays, it was finally released on May 28, 2021. The film was made available on Paramount+ 45 days after its theatrical release (July 12, 2021). A sequel has been announced for an unspecified date in 2025.

Emmett: We won't survive.
Evelyn: We have to try.