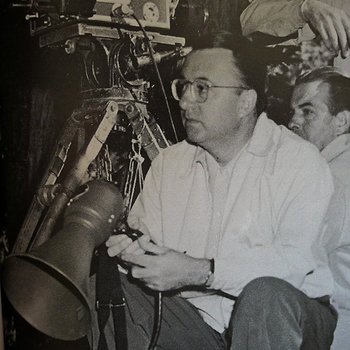 "People need magic. We all seek it. Inside us, we still carry our childhood, stories of another time, told to us by our aunt and uncle. That stays with us, whether we like it or not."
Advertisement:

Tourneur was the son of Maurice Tourneur, the famous French silent film-maker (and a major director in his own right). As a young man, he worked on the sets of his father's films and grew up observing the process of film-making in detail. When his father moved to America, his son accompanied him, and Tourneur worked as a technician on a variety of shorts and feature films. It was during the production of the 1935 film adaptation of A Tale of Two Cities that Tourneur first met Val Lewton, then an assistant to producer David O. Selznick. By the end of the decade, Tourneur made his feature debut, They All Come Out, and when Lewton was placed in charge of a production unit for RKO Pictures, he called his old friend to jump on-board.

The result was films like Cat People, I Walked With a Zombie, and The Leopard Man, horror films made on a very low-budget but which impressed many audiences in its time and decades onwards for its visual invention, its evocative use of black-and-white, and its particular approach to fantasy, where much is suggested rather than shown, and a lot of the horror stems from fear that human subjectivity prevents us from truly seeing the world. Tourneur also made films in other genres in the same decade including the classic Film Noir Out of the Past (starring Robert Mitchum and Jane Greer), the well-regarded western Canyon Passage.

Tourneur described his biggest mistake to be taking a pay cut for the production of Stars in My Crown, a personal project starring a cowboy preacher (played by one of his favourite actors, and good friends, Joel McCrea). The result was a film that decades onwards he would consider his masterpiece but in its time, it made him unemployable, and for the rest of his career, Tourneur remained the "low-budget" director, making a series of highly regarded films and romances including unusual works like Way of a Gaucho (an Argentine Western shot on location in the Pampas) but he never quite made it to the big leagues. Later films of note include Wichita (A Cinemascope Western about Wyatt Earp), Nightfall (a Noir starring Aldo Ray and a very young Anne Bancroft), and his return to the horror genre, and most highly regarded later film Night of the Demon. But he continued making middling films, retiring in 1965.

Tourneur is often considered one of the greatest and most underappreciated directors, flexible in his ability to work in multiple genres, and whose sense of style and humanism was indeed quite remarkable and brilliant.