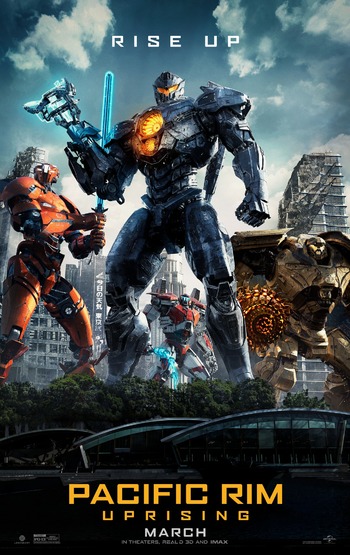 Get it on 'til I die
"We were born into a world at war."
— Jake Pentecost
Advertisement:

Pacific Rim: Uprising is the 2018 sequel to Pacific Rim, directed by Steven S. DeKnight. Guillermo del Toro, who directed its predecessor and stayed on as a producer, is one of the film's credited writers note alongside Zak Penn, Jon Spaihts, Derek Connolly, Emily Carmichael, Kira Snyder, and T.S. Nowlin.

Jake Pentecost (John Boyega), the son of Stacker Pentecost, washed out as a potential Ranger before the events of the first film. Ten years later, humanity has enjoyed peace from stopping the Kaiju threat but fortified their cities and renewed development of the Jaeger program. Jake lives as a scavenger, stealing parts from Jaeger junkyards to sell to the Black Market. He comes across Amara (Cailee Spaeny) who has managed to build her own Mini-Mecha based on Jaeger tech, which ends up getting both arrested. Jake's adopted sister, Marshall Mako Mori (Rinko Kikuchi), offers them a way out of prison time: Jake returns as an active duty Jaeger Pilot while also instructing the new recruits, of which Amara will be a new member.

Jake is reunited with Nate Lambert, (Scott Eastwood) an old rival with some bad history, and Amara deals with the rigors of Jaeger training and antagonism from the other recruits. Dr. Newton Geiszler (Charlie Day) and Dr. Hermann Gottlieb (Burn Gorman) from the first film have to deal with the continued changing landscape of the Pacific Rim Defense Corps, especially the Shao corporation headed by Liwen Shao (Jing Tian). Events unfold that reveal Jaeger development has gotten out of their control, and with it may instigate the return of the Kaijus.

Charlie Hunnam (protagonist Raleigh Becket from the first film), does not return.

The 2017 Comic-Con teaser can be found here

. The official trailer can be found here