Western Animation / The Curse of the Were-Rabbit 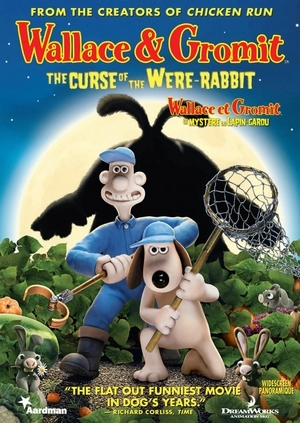 The Curse of the Were-Rabbit is the first (and, to date, only) feature-length animated film featuring Wallace & Gromit. It was the second co-production between DreamWorks Animation and Aardman Animations, as well as being Aardman's second full-length feature film, after Chicken Run. Series creator Nick Park directed with Steve Box, who'd animated on A Close Shave and had previously directed the BAFTA-winning short Stage Fright, serving as co-director.

Due to rabbits disrupting the town's annual vegetable competition, the duo run a humane pest control service. Wallace falls in love with one of their clients, Lady Tottington, who is also being courted by an arrogant aristocratic hunter named Victor Quartermaine. A much larger threat is then posed by a nocturnal beast ravaging the townspeople's vegetables, which the vicar claims is a were-rabbit. Lady Tottington chooses Wallace and Gromit's humane capture methods over Victor's suggestion to shoot the monster. The duo set out to capture the beast before the contest, but things go awry when they learn the beast's true identity.

Released in 2005, it won the Academy Award for "Best Animated Feature", the second DreamWorks picture to achieve this after the inaugural Shrek. It's also the second non-American film to receive this honour, and the second non-computer animated film (the first in both cases was Spirited Away). It also won the British Academy Film Awards' "Best British Film", the British Comedy Awards' "Best Comedy Film", and the Hugo Award for "Best Dramatic Presentation - Long Form", among many others. It's currently the second highest-grossing stop-motion film ever, behind Aardman's own Chicken Run.

The Curse of the Were-Rabbit provides examples of: