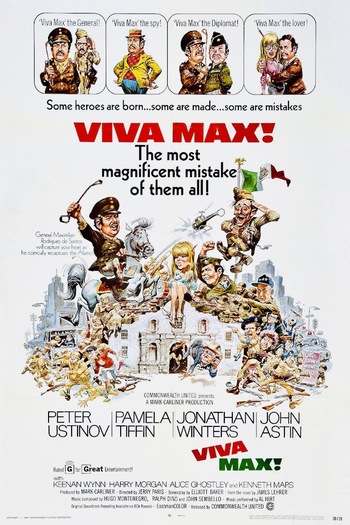 Brigadier General Maximilian Rodrigues De Santos (Peter Ustinov) is the commander of the 87-man Nuevo Laredo garrison of the Mexican army. Goaded by a series of insults from his mistress, he decides to re-capture the Alamo to demonstrate his supposed military genius. In actuality, the egotistical De Santos is an incompetent fool who commands absolutely no respect from his men. It is only through the actions of Sergeant Valdez (John Astin) that the unit has stayed together as long as it has.

Telling his men they're on a diplomatic mission to demonstrate pan-American friendship in a parade at Laredo, De Santos marches them across the U.S. border and promptly commandeers a car and civilian clothing from some tourists. Taking one of his men who has served as a cabbie in Guadalajara and knew how to drive, they reconnoiter the Alamo in disguise. After meeting back up with the platoon, they march down the freeway, through downtown San Antonio, and just before closing time at five o'clock, they charge the gates and "defeat" the garrison, composed of one elderly security guard. They also take the only two other people inside prisoner. These are Paula Whitland (Pamela Tiffin), a '60s college radical who is infatuated by the general and views him as the next Che Guevara, and Edna Miller (Ann Morgan Guilbert), who thinks that the whole affair is a plot by the Red Chinese and that the invasion has started.